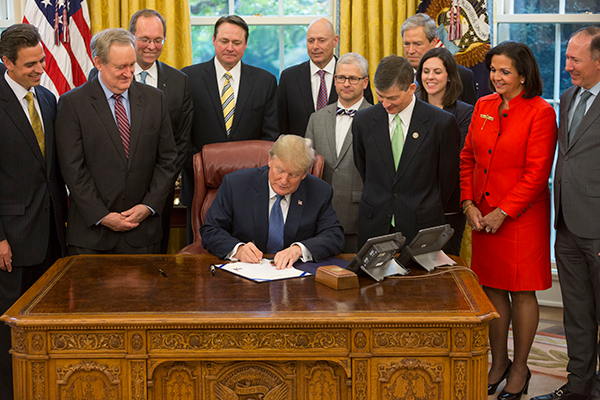 There’s a scene in the 1994 movie True Lies, where the character (played by Arnold Schwarzenegger) confesses to his wife (played by Jamie Lee Curtis) that he is indeed a spy. When she asks him whether he’s ever killed anyone, his response is: “Yeah, but they were all bad.” The Consumer Financial Protection Bureau’s (“CFPB”) Final Rule on arbitration, which went into effect in September, was recently killed by Congress and the President. The Rule had many vocal critics but, unlike the villains in the movie, I don’t think the rule was “all bad.”

The Final Rule (12 CFR Part 1040) was published July 19th in the Federal Register and went into effect as scheduled on September 18th, with “mandatory compliance for pre-dispute arbitration agreements entered into on or after March 19, 2018.” The now-defunct Rule would have: 1) permitted predispute arbitration agreements (“PDAA”) in contracts for consumer financial goods and services;[1] 2) banned class action waivers in PDAAs; and 3) required regulated financial institutions to file customer claims and awards data with the CFPB, which the Bureau intended to publish in redacted form.

The Old Rule is Gone, Never Was … and Can’t Again Be

Congress on October 24 officially nullified and disapproved the Rule retroactively, and despite an unprecedented October 30th “personal appeal” from CFPB Director Richard Cordray asking that he veto it,[2] President Trump signed into law the disapproving Resolution on November 1st. Congress acted under authority of the Congressional Review Act (“CRA”), 5 USC §§ 801 et seq.,[3] a Clinton-era statute. Before 2017, the CRA was used only once since its enactment in 1996; it has already been invoked 14 times since the inauguration.[4] Both Houses of Congress approved an identical Joint Resolution (H.J. Res. 111; S.J. Res. 47) which states that “Congress disapproves the rule submitted by the Bureau of Consumer Financial Protection relating to Arbitration Agreements … and such rule shall have no force or effect.” The CRA provides that nullification is retroactive, and a regulation in “substantially the same form” cannot be promulgated thereafter unless specifically authorized by Congress.[5] Summing up: the CFPB’s Final Arbitration Rule is gone, was never here, and something like it can’t be promulgated again without permission from Congress. As the ServPro tagline says, “Like it never even happened.”®

Now that the CFPB’s Arbitration Rule is officially nullified and disapproved, I’m hoping there can be a renewed focus on one aspect of the defunct Rule that’s often overlooked. The most attention by far was paid to the part of the Rule that barred class action waivers in arbitration clauses in contracts for consumer financial products and services. But scant attention (vitriol or support) was focused on the record-production and data-gathering aspects of the Rule. As described starting in section 5.0 on page 36 of the Bureau’s Small Entity Compliance Guide, regulated financial institutions would have been required to file customer claims and awards data with the CFPB, which the Bureau intended to publish in redacted form starting July 2019. This part of the Rule is gone as well, and that’s unfortunate in my opinion. Yes, FINRA publishes awards on its Website, and American Arbitration Association makes certain consumer arbitration case data public via its Website, but it would have been nice to collect consistently in one place this vast array of case and awards data, and make it freely available to anyone.

A Compromise for the Public Good?

While the entire CFPB Arbitration Rule is now gone, one wonders whether the Bureau can promulgate a new proposed Reg that addresses only the record and data requirements? Would that be in “substantially the same form” as the nullified Rule? There has been no litigation interpreting this aspect of the CRA,[6] so that’s an open question. A new Rule might shore up some deficiencies. For example, the nullified Rule placed on regulated financial institutions primary responsibility to provide the required claims and awards information to the Bureau; in some new rule alternative dispute resolution providers might better fulfill this responsibility.

Perhaps all stakeholders can put aside politics and get together and engage in negotiated rulemaking that would best serve the public. There’s a concept!

[1] Securities investor-broker arbitration was not covered by the Rule; Dodd-Frank carved this out for the SEC. FINRA already bans brokers from using class action waivers in customer account agreements, and FINRA Rules allow investors to opt out of arbitration into class actions if they so choose. See Rule 12204, available at http://finra.complinet.com/en/display/display_main.html?rbid=2403&element_id=4110.

[3] For a nice 21-page primer on the CRA, see Congressional Research Service, Disapproval of Regulations by Congress: Procedure Under the Congressional Review Act (October 2001), available at https://www.senate.gov/CRSpubs/316e2dc1-fc69-43cc-979a-dfc24d784c08.pdf.

[5] The Democrats have introduced legislation to repeal the CRA. Rep. Cicilline (D-RI) on May 16th introduced H.R. 2449 – the Sunset the CRA and Restore American Protection (SCRAP) Act of 2017, available at https://www.congress.gov/bill/115th-congress/house-bill/2449/text.  It has predictably gone nowhere.

[6] See The Hill, GOP in Uncharted Territory Rolling Back Rules Through Resolutions, (Oct. 29, 2017), available at http://thehill.com/regulation/357552-gop-in-unchartered-territory-rolling-back-rules-through-resolutions.