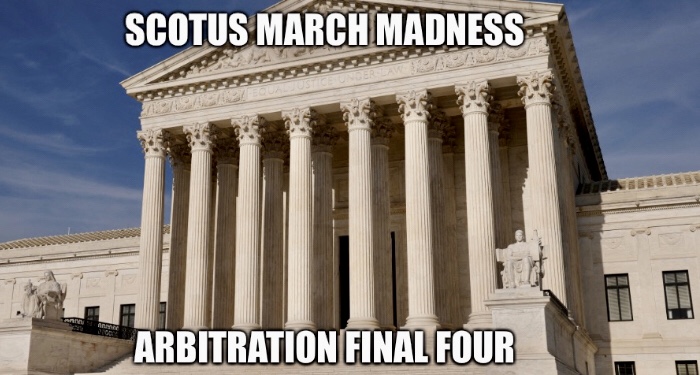 Just a reminder that SCOTUS will be hearing oral arguments on two cases involving arbitration.

We reported in December that the Supreme Court had granted Certiorari in four cases involving arbitration. Then SAA 2022-04 (Feb. 3) advised that the Court had set the cases for oral argument during the last two weeks of March. The oral argument calendar released by SCOTUS on January 28 shows that two of the four cases are set for oral argument next week: March 21: Morgan v. Sundance Inc., No. 21-328; March 23: ZF Automotive US, Inc. v. Luxshare, Ltd., No. 21-401, and AlixPartners LLP v. The Fund for Protection of Investors’ Rights in Foreign States, No. 21-518.

Morgan: The question presented in the August 27 Petition is: “Does the arbitration-specific requirement that the proponent of a contractual waiver defense prove prejudice violate this Court’s instruction that lower courts must ‘place arbitration agreements on an equal footing with other contracts?’ [in] AT&T Mobility LLC v. Concepcion, 563 U.S. 333, 339 (2011).” The Petition notes that there is a significant split on the issue: “This Court should grant certiorari to resolve a longstanding circuit split on the question whether a party asserting waiver of the right to arbitrate through inconsistent litigation conduct must prove prejudice, and if so, how much. This question not only divides the federal courts of appeals, but divides federal courts from geographically co-located state courts of last resort.…”

ZF Automotive – AlixPartners: The September 10 Petition in ZF Automotive asserts that the question before the Court “is substantively identical to the question presented in Servotronics, Inc. v. Rolls-Royce PLC, No. 20-794 (oral argument originally scheduled for Oct. 5, 2021; case removed from oral argument calendar Sept. 8, 2021): Whether 28 U.S.C. § 1782(a), which permits litigants to invoke the authority of United States courts to render assistance in gathering evidence for use in ‘a foreign or international tribunal,’ encompasses private commercial arbitral tribunals, as the U.S. Courts of Appeals for the Fourth and Sixth Circuits have held, or excludes such tribunals, as the U.S. Courts of Appeals for the Second, Fifth, and Seventh Circuits have held.” The October 5 Petition for Certiorari in AlixPartners, which is consolidated with ZF Automotive, states: “Whereas the arbitration in Servotronics was between two private parties, the arbitration here is between a private party and a foreign state — an application of Section 1782 upon which the United States has expressed ‘particular concern.’ The question presented is: Whether an ad hoc arbitration to resolve a commercial dispute between two parties is a ‘foreign or international tribunal’ under 28 U.S.C. § 1782(a) where the arbitral panel does not exercise any governmental or quasi-governmental authority.”

A Handy Chart on All Four Cases

The chart below has information on the “Arbitration Final Four” cases. Oral arguments are audio livestreamed via the SCOTUS Website. The Court’s Website posts audio recordings and transcripts the same day as arguments.

Amicus Briefs aplenty have been filed in all four cases and can be found by clicking on the link to each case.)