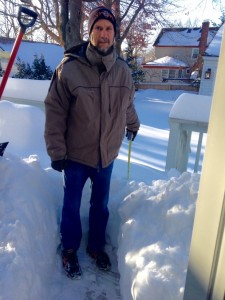 As I sit here in northern New Jersey trying to type with my still-defrosting fingers in the aftermath of the Great Blizzard of 2016 (that’s me after digging for 20 minutes to clear 15 feet of my deck), my thoughts naturally turned to arbitration (and yes, hot soup). This in turn caused me to peruse some of my past writings on the virtues of Web-based alternative dispute resolution, which I update and present below.

One of the persistent complaints about arbitration is the hassle and expense of going on a road trip to attend the arbitration hearing to seek a recovery. A Second Circuit decision in 2013 underscored this problem, and prompted me to write a blog post. In Duran v. The Hass Group, L.L.C., 531 Fed. Appx. 546 (2d Cir.2013), the court was faced with balancing the very strong public policy in favor of enforcing arbitration agreements under the Federal Arbitration Act (“FAA”) as articulated by the Supreme Court, against a seemingly unfair predispute arbitration agreement (“PDAA”) that required a disabled, nearly-destitute consumer residing in New York to arbitrate her dispute in Arizona. The Second Circuit ruled against the consumer, essentially saying it had no choice given clear Supreme Court holdings requiring that PDAAs be enforced according to their terms.

The Facts in Duran

The facts are laid out nicely in the underlying Eastern District of New York opinion. The consumer in Duran sued in federal district court the Hass Group, alleging that the credit repair firm took from her nearly $4,000 and then failed to provide the promised services to settle her $30,000 in credit card debt. Her suit was based on violations of New York law and the federal Credit Repair Organizations Act (“CROA”), 15 U.S.C. §§ 1679 et seq. Her contract with Hass, however, contained a PDAA that called for arbitrations to be held in Arizona (curiously, the PDAA did not say who would administer the arbitration). In a familiar scenario, the firm moved to stay the lawsuit and compel the dispute to arbitration according to the PDAA. In the meantime, the Supreme Court decided Compucredit Corp. v. Greenwood, 132 S. Ct. 1632 (2012), upholding PDAAs requiring arbitration of CROA disputes. Thus the consumer was left with arguing that the PDAA was unconscionable because it required her to arbitrate her dispute in Arizona. She lost at both the district court and circuit court of appeals levels.

The determining factor for both courts was that the consumer had conceded the dispute was subject to arbitration; her beef was with the locale for vindicating her rights. Citing Howsam v. Dean Witter Reynolds, Inc., 537 U.S. 79 (2002), which held that procedural issues like this are for the arbitrator, the district court stated: “Thus, because plaintiff concedes she is required to arbitrate the underlying dispute, because forum selection is an issue presumptively left to the arbitrator and because the contract contains no language overcoming such presumption, this Court has no authority to intervene.”

The Second Circuit had the same rationale, stating: “We agree with the District Court that the question of the validity of the forum selection clause is a procedural issue presumptively for the arbitrator to decide, because, critically, Duran has conceded that her contract with the defendants binds her to submit any dispute to arbitration.”

It seems to me the circuit court felt badly that it had to come to this conclusion. Stripped to its essentials, the ruling essentially says “We’re really sorry that you are nearly destitute and are officially disabled according to the Social Security Administration, but clear U.S. Supreme Court rulings require that we send you to Arizona to argue before the arbitrator your unconscionability argument – involving a $4,000 dispute. And by the way, it would have been better had you not conceded that the dispute was subject to arbitration.” I say this because the court in footnote 1 explained what was behind its “Catch-22” type ruling:

“We recognize a logical flaw in this result: By requiring arbitration over the validity of the forum selection clause to proceed pursuant to the terms of that forum selection clause, we may well be enforcing an invalid—and, indeed, unconscionable—contract. Even if the arbitrator ultimately decides that the merits of the dispute should not be arbitrated in Arizona, a round of arbitration will already have occurred in Arizona pursuant to the invalid forum selection clause. One might even wonder whether, in that scenario, we would have invented our own contractual terms, inasmuch as the parties would never have had a valid contract to arbitrate in Arizona. Regardless, we think this conclusion, however unusual, is dictated by the binding precedents of the Supreme Court, see, e.g., Green Tree Fin. Corp.,539 U.S. at 452-53, and of our own circuit, see UBS Fin. Servs., 660 F.3d at 654-55.”

I said several things in my 2013 blog post on the case that remain true today. The consumer ADR blogosphere was aghast at this ruling. Several folks correctly pointed out that the AAA, FINRA, and JAMS have consumer ADR programs that would not allow this result; a consumer would have the arbitration hearing close to where they live, PDAA be damned. The same is true for ADR providers that adhere to the Consumer Due Process Protocol which provides in Principle 7:

“In the case of face-to-face proceedings, the proceedings should be conducted at a location which is reasonably convenient to both parties with due consideration of their ability to travel and other pertinent circumstances. If the parties are unable to agree on a location, the determination should be made by the Independent ADR Institution or by the Neutral.”

“All parties are entitled to a fundamentally-fair arbitration hearing. This requires adequate notice of hearings and an opportunity to be heard and to present relevant evidence to impartial decision-makers. In some cases, such as some small claims, the requirement of fundamental fairness may be met by hearings conducted by electronic or telephonic means or by a submission of documents. However, the Neutral should have discretionary authority to require a face-to-face hearing upon the request of a party.”

But, despite these protections, a problem remains: the consumer often has to schlep (Yiddish[1] for lug or drag) themselves and perhaps their counsel to a hearing, even if it’s relatively close by. Ditto for the arbitrator(s) and witnesses. Makes you wonder if there’s a better way, especially during the winter in northern climes that get snowstorms. This question becomes even more germane considering how relatively unpredictable the weather can be. Consider this: until last Friday, New York City had a grand total of a trace of snow for the entire winter. Enter the Great Blizzard, which this weekend dumped more than two feet of snow on the region, causing paralysis from Washington, D.C. to Boston.

Is there a better way to conduct arbitrations short of all participants dragging themselves to the same physical location? I suggest there is – the Arbitration Resolution Services way (“ARS”) way. The ARS model is cloud-based, with the entire arbitration or mediation process being conducted online via the Web. The ARS rules governing consumer disputes assume that cases will be decided by electronic review of documents without the need for a hearing. But if a party wants to have a hearing, they can have a telephonic one or one conducted by videoconference (read: no schlepping necessary, but if by videoconference, you might want to wear a decent outfit) under the rules. Now, in the interest of full disclosure, I point out that I am Chairman of the ARS Board of Directors. I also point out, however, that I would not be the Chairman if I didn’t believe in the organization or the fairness of its rules.

*George H. Friedman, an ADR consultant and Chairman of the Board of Directors of Arbitration Resolution Services, Inc., retired in 2013 as FINRA’s Executive Vice President and Director of Arbitration, a position he held from 1998. In his extensive career, he previously held a variety of positions of responsibility at the American Arbitration Association, most recently as Senior Vice President from 1994 to 1998. He is an Adjunct Professor of Law at Fordham Law School. Mr. Friedman serves on the Board of Editors of the Securities Arbitration Commentator. He is also a member of the AAA’s national roster of arbitrators. He holds a B.A. from Queens College, a J.D. from Rutgers Law School, and is a Certified Regulatory and Compliance Professional.