ARS can forecast that experts and arbitrators are ready for cloud-based ADR… And snow is on the way. 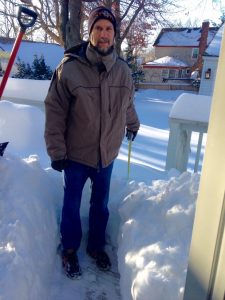 As the mid-Atlantic and Northeast states brace for a massive blizzard (that’s me after digging for 20 minutes to clear 15 feet of my deck after the last year’s), my thoughts naturally turned to Web-based ADR, which is a perfect lead-in to my blog post today. Results of a recent online poll of arbitration experts and arbitrators had a consistent theme: these arbitration participants seem ready to embrace cloud-based alternative dispute resolution (“ADR”) and think this is where the future is headed.

The poll was conducted in February, posing several questions to a small group of experts who routinely appear in arbitrations. Many of the respondents also serve as arbitrators. The poll was sponsored by Arbitration Resolution Services, Inc., a cloud-based alternative dispute resolution provider integrating state-of-the-art technology with experienced and knowledgeable professionals, where the entire process can be completed online. The poll aimed to test the assumption that key arbitration participants are ready to use cloud-base ADR. In short: yes, they are.

The poll’s underlying premise was simple: arbitration participants often find themselves waiting around in airports and spending time in hotels. Wouldn’t it make better sense if they could just all agree to do this electronically? The short ten-question survey, Efficient Dispute Resolution, had four core sections: Case Administration/Paperwork; The Hearing; Productivity; and General. Embedded in each section were a few questions.

Presented immediately below are the results,[1] followed by a concise analysis. Where a series of questions had an introduction, it is repeated verbatim in italics. Responses were received from about third of the 90 individuals polled.

ARS is a web-based alternative dispute resolution (ADR) provider that provides a proprietary cloud-based service that integrates technology with expert arbitrators and mediators for a revolutionary approach to dispute resolution. The company’s Arb-IT™ software fully automates the step-by-step process of mediation and binding arbitration. Arb-IT™ allows users to upload evidence such as, photographs and videos from virtually any PC, tablet or mobile device so parties can easily participate in the dispute resolution process. Arb-IT™ also uses a proprietary, fully automated process when selecting mediators and arbitrators.

Generally speaking, “brick-and-mortar” arbitration participants – parties, counsel, witnesses (expert and fact) – must physically appear at a hearing, even if it’s relatively close by. This can be both expensive and disruptive to both lives and businesses. At ARS the entire arbitration or mediation process being conducted online via the Web.

My assessment: the responses show strong support for online ADR in theory and to a great extent in practice, but there’s still a degree of reluctance to replace in-person hearings with videoconferencing technology. First, the good news:

Questions 3 and 4 produced interesting results. Question 3 asked whether online ADR would have improved the case administration process. The “Yes” and “No” responses were split at about a quarter each, while half of those answering weren’t sure. I think this may be more a function of the survey participants – as experts or arbitrators – not being that involved in the case administration process (again, half of them weren’t sure). Question 4 asked whether online ADR would have improved the hearing process. Only a fifth said “Yes” while a third said “No” and a little less than half weren’t sure. Yet, survey respondents clearly believed an online hearing would save time and money. To me this shows some folks at this stage aren’t quite ready to let go of in-person hearings (although almost half aren’t sure), yet they are convinced there’s great value in using technology to avoid going to an in-person hearing. Another blizzard or two might change that perception!

As I’ve said before, while arbitration isn’t new by any means, new ways of arbitrating are proliferating. Chief among them in my view is Web-based dispute resolution. It’s my firm belief that virtually all aspects of arbitrations and mediations will within a few years be Cloud-based and people will think it’s quaintly anachronistic to drag themselves off to a brick-and-mortar facility to attend hearings, and use paper to file cases, pick arbitrators, schedule hearings, and exchange information (see my ARS blog post from a year ago on this very topic).[2] As I’ve predicted previously, as ADR providers expand their online services for case filing, case management, document, image and video uploading, arbitrator selection, calendaring, and bill payment, fewer dispute resolution providers, parties, and arbitrators will be willing to use paper. In fact, I predict that extra fees will eventually be assessed to those who insist on using paper for correspondence or bill payment.

Trust me, the future belongs to those who embrace Web-based, online dispute resolution, with the emphasis being on complete, comprehensive, online alternative dispute resolution. If you disagree, we can debate it five years from now! In the meantime, pray for no more blizzards.

*George H. Friedman, is an ADR consultant and Chairman of the Board of Directors of Arbitration Resolution Services, Inc. In his extensive career, he previously was FINRA’s Executive Vice President and Director of Arbitration from 1998 – 2013, and held a variety of positions of responsibility at the American Arbitration Association, most recently as Senior Vice President from 1994 to 1998. He is an Adjunct Professor of Law at Fordham Law School. Mr. Friedman serves on the Board of Editors and is a Contributing Legal Editor of the Securities Arbitration Commentator. He is also a member of the AAA’s national roster of arbitrators. He holds a B.A. from Queens College, a J.D. from Rutgers Law School, and is a Certified Regulatory and Compliance Professional.

[2] Thoughts on the Great Blizzard of 2016… and Web-based Dispute Resolution (January 25, 2016) <available at https://www.arbresolutions.com/thoughts-on-the-great-blizzard-of-2016-and-web-based-dispute-resolution/>