Richard, Here’s Another Nice Mess You’ve Gotten Us Into

I promised not to discuss politics at the Thanksgiving table, but the holiday meal is over, and I cannot remain silent. As has been widely reported there is, to put it mildly, instability and confusion at the Consumer Financial Protection Bureau (“CFPB”). Here, in a nutshell, is what’s going on: 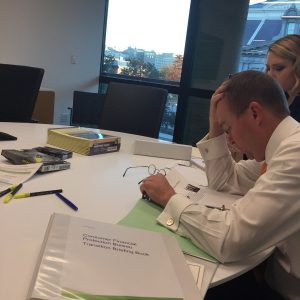 A Tragedy or a Comedy?

Let me quote from the classic comedy team, Laurel & Hardy: “Here’s another nice mess you’ve gotten us into!” Indeed, because of his “going out the door,” last-second, appointment of an Acting Director, former CFPB Director Richard Cordray has created quite a mess. His actions have incited a potential civil war within the agency, and between a federal agency and the President. We’ve experienced the incredible sight of two individuals claiming the same title, and one of those people suing the other one and the President. As today (November 27th) dawned, these questions went through my mind: Are Mulvaney and English going to fight over the keys to office? Who will staff listen to? What about security or law enforcement? What if the two Acting Directors send conflicting notices to be published in the Federal Register? Who will control the Bureau’s social media accounts? Who will the Webmaster listen to? Monty Python also would have loved this.

In the end, the President will win when his nominee for the Director post is confirmed by the Senate. In the meantime, I suspect Mr. Cordray has unwittingly confirmed perceptions that the Bureau is a rogue agency. I also think his actions will galvanize the Republican Senate majority to brush aside Democrat objections and swiftly confirm the President’s nominee for the full Directorship. Moreover, it wouldn’t surprise me if legislative efforts to reform the CFPB to require much greater accountability – or even dismantle it – gain traction. If that was Mr. Cordray’s plan and his desired legacy, he has in my opinion executed his plan quite well.

What of Consumer Arbitration Reform?

The pity of all this is that reform of consumer financial arbitration – in my opinion a worthwhile endeavor – has been set back if not killed. As described in my recent ARS blog post, Let’s Not Toss Out the Data-gathering Baby with the CFPB Arbitration Rule Bathwater, the now-defunct CFPB arbitration rule would have required that regulated financial institutions file customer claims and awards data with the CFPB, which the Bureau intended to publish in redacted form starting July 2019. I said in my blog, this part of the arbitration rule is now gone, and one wonders whether the Bureau can promulgate a new proposed Reg that addresses only the arbitration record and data requirements? I’m afraid this is now impossible, and in my opinion, it’s a sad byproduct of Mr. Cordray’s recent actions.